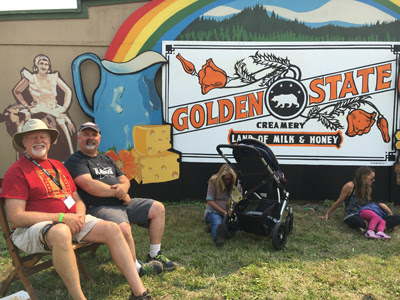 In 2017, Playhouse Arts commissioned local artist Lush Newton to create a special outdoor art exhibit,  inspired by the 100th anniversary of the Creamery Building. The exhibit, titled “California State Creamery; The Land of Milk and Honey,”  showcases  Newton’s unique whimsical style in several oversized art pieces placed around the building, including representations of a historical train station and train engine, a family of Portuguese farmers and a special ode to Creamery Building architect Franklin Georgeson. This exhibit will be up throughout the festival.

Tim Gray’s Foot Fall, an audio installation, was created to accompany a stroll around the Creamery District. Gray states, “The world is quite a noise filled place. So much so that most of us screen out much of this sound. This piece is designed to envelop the listener into another aural world, and alternative universe in sound’.  Listen Here

Our mission is to create a vibrant, diverse community where artists and entrepreneurs prosper

For Email Marketing you can trust.